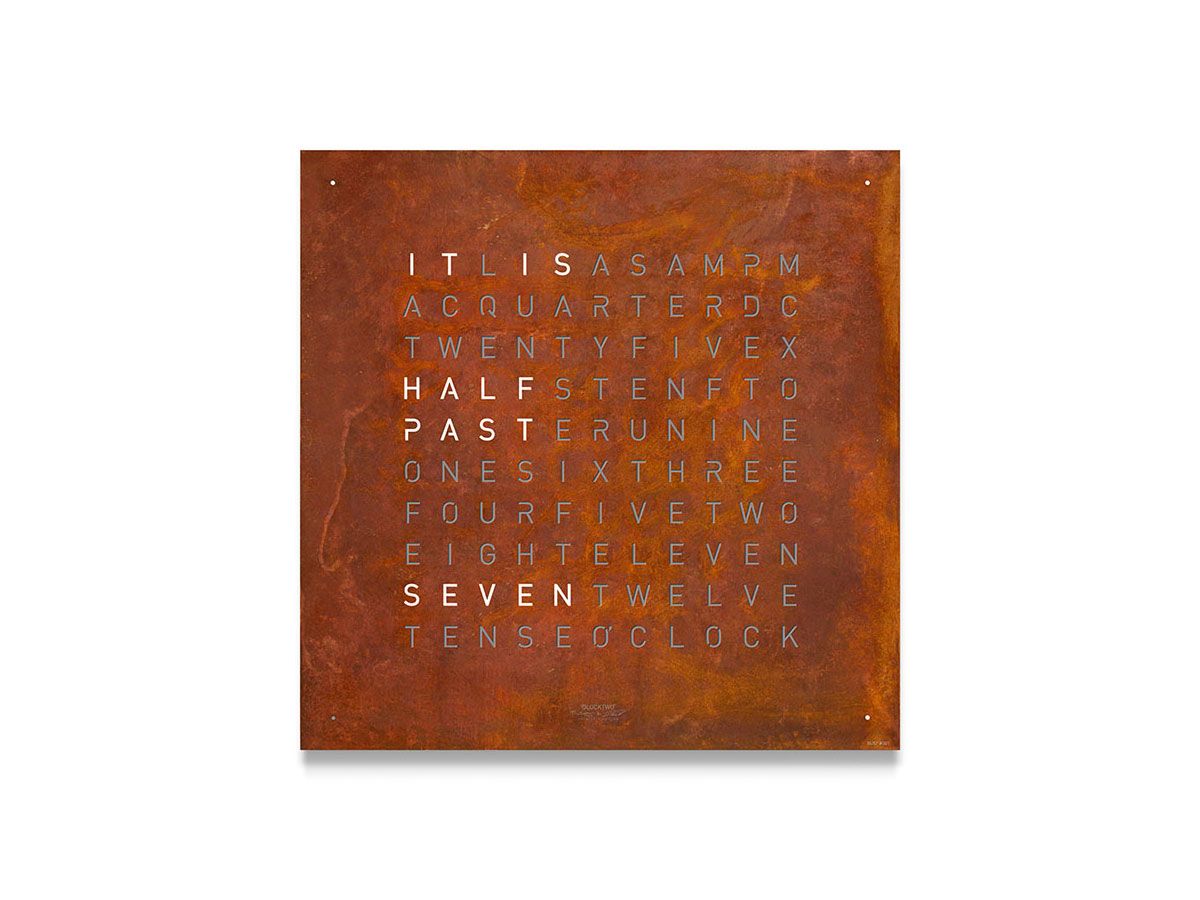 The QLOCKTWO collection is designed by German designers Biegert & Funk, and includes a series of tables, walls, and wristwatches. Available in different sizes and finishes.

The idea behind the QLOCKTWO project is to combine the classic concept of the clock with technological inventiveness. A revolutionary concept in which words take the place of numbers. Then, it’s been eliminated the logic of the hourly progression, replaced by a kind of "crossword" with scattered terms, which reveal their function as the individual letters light up.

The panel is composed of a matrix with 110 characters arranged in an apparently random system. The words change any five minutes a four illuminated spot in every corner display the exact minute. QLOCKTWO is available in more than 20 languages. The front panel is held up by magnets and can easily be replaced. The watch is equipped with an ambient light sensor, which automatically adjusts the intensity of the LED. QLOCKTWO connects itself to the Frankfurt atomic clock for the time synchronization, twice a day.

The 45x45 cm QLOCKTWO CLASSIC can be hung on the wall like a frame, or it can be set up as a freestanding unit with the acrylic glass base. The languages are pre-installed in the watch case, just change the front panel to update completely the aspect of the watch.

Curious and outside the line, Qlocktwo reinterprets originally and surprisingly the vision of time with its high-quality, design clocks and whatches. The firm, set in Schwäbisch Gmünd, since 2009 creates every piece on demand, bringing the Made in Germany artisanal know-how worldwide. Qlocktwo clocks are available for the wall, table, and...
Go to Qlocktwo's page
Request information
Need help?
For expert advise, do not hesitate to contact us at +39 090 6258945 or via email at [email protected] Or fill in the form to ask for more information on the product.
Questions
FAQ
Ask for information
Reviews
Write Your Own Review
Only registered users can write reviews. Please Sign in or create an account
Back to top Related Posts Information Features Shipping and returns Brand Designer Request information Reviews
100% Original